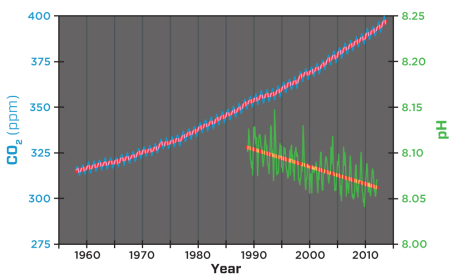 Here we present first of its kind high frequency Total Alkalinity (AT) and pH data from a single solid-state autonomous sensor collected during a 6-day deployment at a barrier reef in Kāneʻohe Bay on the CRIMP-2 buoy. This dual parameter sensor is capable of rapid (<60 s), near simultaneous measurement of the preferred seawater carbonate […]

We determined the impact of anthropogenic CO2 (Cant) accumulation on the δ13C of dissolved inorganic carbon (DIC) in the Arctic Ocean (i.e., the 13C Suess effect) based on δ13C measurements during a GEOTRACES cruise in 2015. The δ13C decrease was estimated from the amount of Cant change derived by the transit time distribution (TTD) approach […]

Highlights • Ventricular and periventricular zones of whole brain activated by acidification. • Cerebral hemisphere and medulla oblongata involved in rapid acid-base regulation. • Diencephalon and mesencephalon activated by short-term acidification. Abstract Altered behaviors have been reported in many marine fish following exposure to high CO2 concentrations. However, the mechanistic link between elevated CO2 and […]

The oceans are increasingly affected by multiple aspects of global change, with substantial impacts on ecosystem functioning and food-web dynamics. While the effects of single factors have been extensively studied, it has become increasingly evident that there is a need to unravel the complexities related to a multiple stressor environment. In a mesocosm experimental study, […]